Number Of Cases Raise to 39 This Morning. It started To Spread!!!

How to protect yourself?

Plans to contain coronavirus if it spreads, involving possible school closures, cancelling events and bringing NHS staff out of retirement, are to be set out by the UK government.

Unnecessary travel could be curbed and people urged to work from home.

Legislation will be introduced to ensure ministers have the powers to prepare for a widespread outbreak.

The chancellor says this month's budget will see help for the health services and economy in the face of the threat.

Health Secretary Matt Hancock said the government was not currently recommending the cancelling of large events such as the London Marathon or school closures, unless this was advised by Public Health England.

However, he said there was a "significant risk" of the virus becoming more widespread, meaning further measures might be necessary.

"There may be things that we have to do down the line that we may not want to, but we will need the powers to do that, hence proposing emergency legislation," he told BBC Breakfast.

It comes after Prime Minister Boris Johnson on Monday warned there could be "significant expansion" in UK cases as the number rose to 39.

What do I need to know about the coronavirus?

HOW IS THE UK PLANNING FOR AN OUTBREAK: How prepared are we?

WHAT ARE THE SYMPTOMS? A simple guide

WAYS TO PREVENT CATCHING IT: How to wash your hands

HOW TO SELF-ISOLATE: What you need to know

WHERE ARE WE WITH A VACCINE? Progress so far

A VISUAL GUIDE TO THE OUTBREAK: Virus maps and charts

Should the virus spread further, the government could seek to reduce contact between people as part of a so-called "social-distancing" strategy, which would aim to delay the peak of the outbreak until later in the year when the weather is warmer.

Ministers will re-iterate that existing powers allow them to limit the use of public transport and ban mass gatherings. But they are expected to stress that, given the social and economic impact of such a move, such measures are more likely to be used to curb local outbreaks than imposed nationwide.

A bill that would allow the government to use extra powers to help control the virus is expected to go through Parliament by the end of the month.

Rules around staff-to-pupil ratios in education and childcare settings could be relaxed in case of staff sickness caused by the spread of the virus.

The plans, to be announced at Downing Street, also include the emergency registration of retired doctors and nurses.

Thirty hospitals across the UK could set up designated wards to treat coronavirus patients, with routine treatments cancelled in the worst-case scenario of widespread transmission in the UK.

Behind closed doors in government there is a realisation that an outbreak of coronavirus could go on for many months and cause a lot of disruption to many people's lives.

Many of us might be asked to work at home. There are questions too about how self-employed people or those on zero hours contracts can make a living. What happens to the local elections in May? Can the NHS, already under a lot of pressure, really cope?

There is a lot that neither the public, nor our politicians, can be sure of. The science will guide the approach that ministers take, but that is understandably changing by the day.

Boris Johnson's government is certainly no longer in the position of surveying the new political landscape and wondering which of its priorities it can choose to deal with first. Instead, it faces an immediate and highly complicated question it needs to answer.

Get it wrong and there could be serious political damage too.

Meanwhile, Chancellor Rishi Sunak has ordered Treasury officials to work up plans to support the public health response, businesses and the economy in his Budget on 11 March.

He said: "We are well prepared for this global threat and, as the wider economic picture becomes clearer, we stand ready to announce further support where needed."

Other measures in the government plan would see:

Coronavirus being a standing item in every cabinet agenda

A public information campaign will be launched later this week outlining how the public can help to limit the spread of the virus, including by washing hands regularly with soap and water.

There were four new UK cases announced on Monday, all of whom had travelled to Italy - which has seen the largest outbreak in Europe.

They are from Hertfordshire, Devon and Kent and tracing their contacts has started, Prof Whitty said.

The latest cases came as the EU raised the coronavirus risk level in member states to "moderate to high". 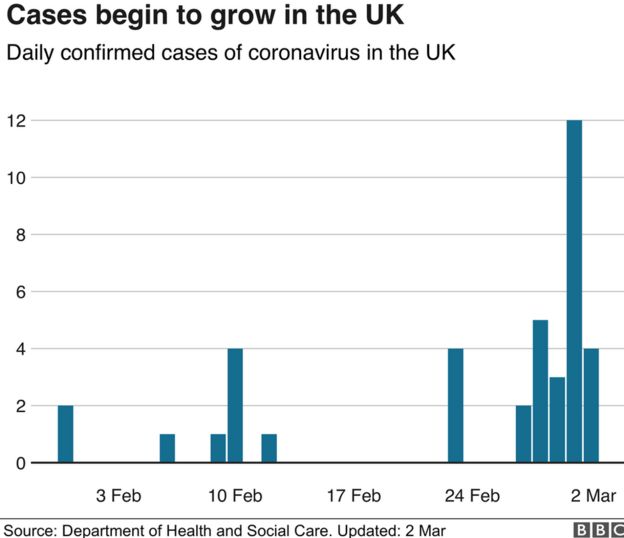 The government's plan to tackle the virus, agreed by all four parts of the UK, was finalised at an emergency Cobra meeting on Monday.

Globally, about 86,000 people have been infected, with cases in more than 50 countries. 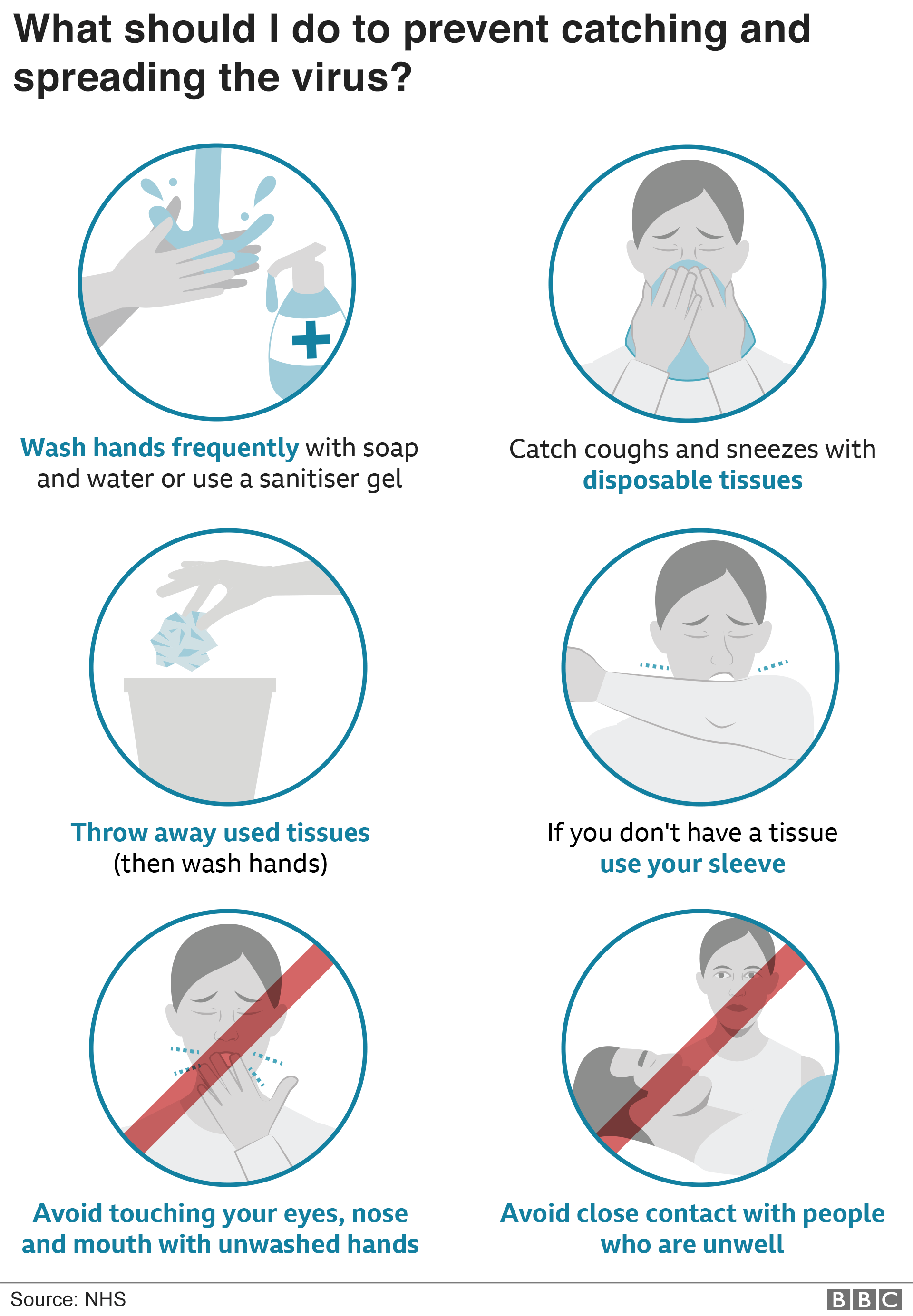 More than 3,000 people have died - the vast majority in China's Hubei province, where the outbreak originated in December.